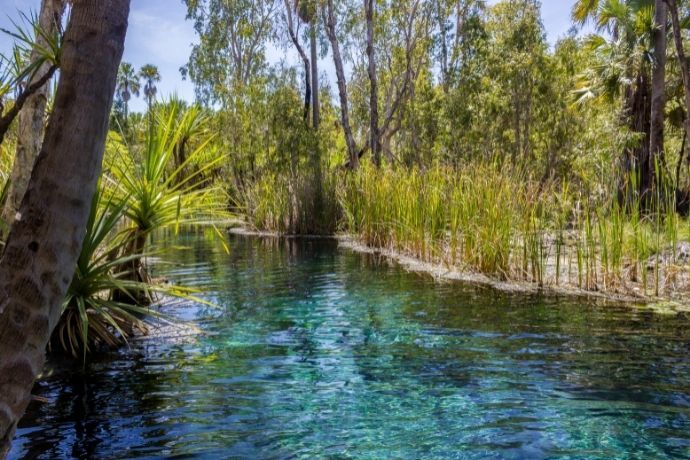 The Northern Territory road trip between Darwin and Uluru is regarded as an essential Australian outback experience.  A diverse range of experiences are available along the route, ranging from the awesome spectacle of Uluru, thermal hot springs and amazing National Parks.

To make the most of the road trip you need to be prepared to take some side trips, however in the Northern Territory these will be limited for a 2WD vehicle.  All of the options described in this article are accessible by 2WD vehicles such as cars and vans.

This article provides a detailed overview of the main Stuart Highway route and side trip options between Alice Springs and Uluru in the Northern Territory.  The trip stages are detailed in:

Disclaimer:  This article contains affiliate links.  If you book after clicking on one of these links then we may receive a small commission at no extra cost to you.

The major route between Darwin and Uluru in the Northern Territory is the Stuart Highway which can be travelled direct in 25 hrs over the 1964 km, 1221 mi distance.

The Stuart Highway consists of mostly single carriageway roads with a 130 km/hr (80 mi/hr) speed limit outside of the towns along the way in accordance with the signage.  Be aware that the route is used by road trains which are trucks which haul multiple large trailers.  Therefore be very careful overtaking, and it is worthwhile to ensure you have a more powerful engine in your car to reduce your overtaking time past the road trains.  The Northern Territory is not a good place to have a gutless vehicle.

The route also has large expanses of unpopulated roads between towns, so ensure you pack extra water and food in your vehicle and also pack a first aid kit.  For more information about preparing for your trip see 5 Top Tips to Prepare Your Car for a Big Road Trip.

The road trip from Katherine to Tennant Creek on the Stuart Highway consists of a drive of 673km, 418 mi, 8:18 hrs. This section of the Stuart Highway encompasses the transition from the tropical Top End to the more arid Red Centre.

The Stuart Highway follows the route which was led by the construction of the Overland Telegraph line which was built to connect Australia with London in 1870 – 1872.  The telegraph line was constructed between Adelaide and Darwin and connected with a submarine cable which connected with Java in Indonesia.  The Overland Telegraph was still in use until the 1970s, however the international line was cut during World War II in anticipation of Darwin being invaded by the Japanese and was subsequently never reconnected.  Along the Stuart Highway route is the evidence of the cable line and repeater stations.

The impact of World War II is a notable feature along the Stuart Highway with many locations where military bases and infrastructure were established to help prevent Australia from being invaded by Japan.

The Cutta Cutta limestone caves are located 30km (19 mi) south of Katherine and are accessible from the Stuart Highway via a 1km sealed road.  There is a short woodland walk to reach the caves, however cave access is only available by booking a guided tour.

Mataranka Thermal Pools are lushly vegetated natural hot springs located in the Elsey National Park near the town of Mataranka which is a 109km (68 mi) drive southeast from Katherine.

The main hot pool is located at Rainbow Springs which is a short 7km (4 mi) drive on a sealed road from Mataranka which has 34C (93F) temperature water in a crystal clear large pool.  Rainbow Springs are regularly visited by tourist coaches so the number of visitors can peak and ebb significantly.

The alternative less visited option is Bitter Springs which is a short 3km (2 mi) drive on a sealed road from Mataranka which has a constant 32C (90F).  The water is crystal clear and you can swim along the very deep creek which has multiple access points.

The small town of Larrimah is located 182 km, 113 mi, 2:15 hrs southeast of Katherine.  Larrimah has several World War II historic sites, and is also the home of the well regarded Fran’s homemade pies.

Daly Waters which is located 273 km, 170 mi, 3:25 hrs southeast of Katherine is the home of the Daly Waters Historic Pub which has been voted as one of the top 10 pubs in Australia.

The 405 km, 252 mi, 5:04 hrs road trip from Daly Waters to Tennant Creek becomes a true outback journey with minimal population and very few features along the way. The stopping points along the way include Elliott (152 km, 1:56 hrs) and Three Ways (381 km, 4:46 hrs).  Three Ways is notable for being the junction between the Stuart Highway and the Barkley Highway which heads east towards Mount Isa in Queensland.

Just north of the Telegraph Station on a 6km unsealed road which is mostly 2WD accessible is the Kunjarra ‘the Pebbles’ site which has spectacular rock formations.

The Nyinkka Nyunyu Art and Cultural Centre provides an insight into the local Aboriginal culture.  Of particular interest is the self guided audio tour which provides insights into the different uses of the local native plants which are on display at the centre.

The Stuart Highway is vehicle accessible all year round, except in the event of major flooding which is normally associated with a cyclone.

The Top End has a tropical climate.  There are two main seasons in the Top End, which consist of the monsoonal wet season (November to April), the dry season (May to October).  Also be aware that there is an uncomfortable period which is known locally as ‘The Build Up’ over October to December where the humidity is rising but the monsoonal daily wet season rain has not yet arrived.

Most people prefer to visit the Northern Territory during the dry season, however during the wet season features such as waterfalls, lakes and stream will be at their best.

The Northern Territory is the home for both freshwater and saltwater crocodiles which can attack and kill humans and animals.

In the Northern Territory you should not swim in rivers, swamps or lakes unless you have been advised by a reputable source that the water is crocodile free (just because you cannot see them does not mean they are not there).  Sometimes crocodiles can also be found on beaches and around offshore islands.

Do not assume that there will be signs warning of danger.  Both types of crocodile can live hundreds of kilometres inland from the coast.  The NT Parks and Wildlife Commission – Be Crocwise website has more information to help you to stay safe.

I have also found an article which aggregates the information about both non-fatal and fatal crocodile attacks in Australia since 2002.  Don’t let it be you…

Disclaimer:  This article contains affiliate links.  If you book after clicking on one of these links then we may receive a small commission at no extra cost to you.