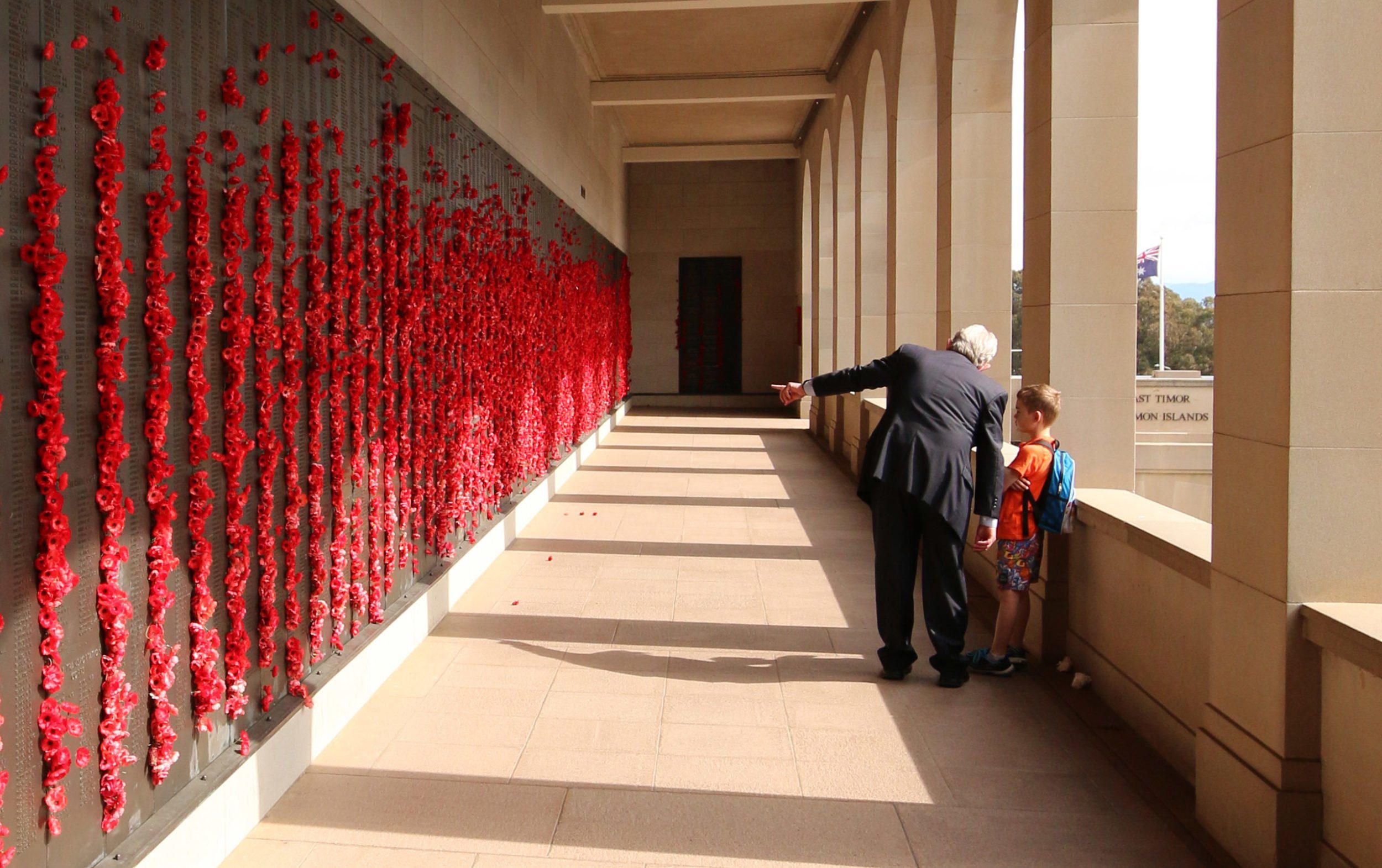 On the first look it was an amazing display.  Seeing the famous G for George Lancaster bomber aircraft still standing after so many missions and the amazing ambience and audio visual display was great.  On the second look and reflection it was a heart-wrenching display.  Seeing how so many Australians and other nationalities had fought and died in Bomber Command during World War II really brought it home that here was a relic of a war which impacted so many families, including mine.

When we decided to visit Canberra for our recent multi-generational family holiday we immediately put the Australian War Memorial on our list of places we wanted to visit.  Partly because my mother and father in law were keen to visit (my father-in-law is a Vietnam veteran and my mother-in-law has been researching the family history) but also because we wanted to share this part of Australia’s history with our children.  At ages almost 10, 8 and almost 6 years old we felt that our children were old enough to start to understand.

It is easy to forget in our fast paced modern world the sacrifices so many people have made both in the past and present to ensure that Australia is a great country to live and hand over to our children.  Every Anzac Day we remember those sacrifices, but visiting the Australian War Memorial takes that remembrance a step further to attempt to truly understand our history.

Views of the Australian War Memorial

The Australian War Memorial is a prominent feature of Canberra.  Everywhere you go in central Canberra it is part of the scenery.  From the top of Mt Ainslie you can see the pattern clearly – from Mt Ainslie there is a straight line from the Australian War Memorial, along Anzac Avenue, across Lake Burley Griffin and then on to Old Parliament House and new Parliament House.  The placement sends a clear message that Australia is built upon both the old and the new and that they are inextricably linked.

The Roll of Honour at the Australian War Memorial

When you arrive at the Australian War Memorial there is a sense of quiet.  After the walk through the memorial gardens you are confronted by the reflection pool and the eternal flame, which is surrounded by the too-long Roll of Honour and backed by the Hall of Memory which sits under the dome.

We met our guide, Tim Bailey, in the entry way.  Tim talked about our options and it quickly became clear that there was no way that we would be able to see ‘everything’ in a single visit.  He asked about our particular interests and was able to take us to see artefacts related to those interests.

We started by looking for our family members and old friends whose names are listed on the Roll of Honour.  With over 102,000 names inscribed you need to know where to look.  Our children asked lots of questions about what they were seeing and Tim did a great job of explaining it in a way they could understand.  He explained that there was originally no plan for the red poppies to be placed on the Roll of Honour walls.  But expansion gaps had been left to allow for the panels to expand and contract in the heat and cold and people started putting poppies into the gaps in the panels.  The tradition has continued ever since, and the staff can provide a ladder to enable people to safely place their poppies.

We later returned to place poppies beside the names of our family members and friends.

The Hall of Valour at the Australian War Memorial

At the far end of the Roll of Honour is the Hall of Valour which sits under the dome of the Australian War Memorial.  The interior is unexpected.  You enter a room filled with light as a result of the beautiful glass mosaic tiles and stained glass windows.

The artwork on the walls and stained glass windows is dedicated to both the First World War and the Second World War.  In the centre is the Tomb of the Unknown Soldier which symbolises all Australians who have died in war.

Exhibitions at the Australian War Memorial

We then moved on to look at some of the exhibitions which have been set up to remember specific wars Australia has participated in.

Unfortunately while we were there the First World War display was closed for renovation, but it is expected to reopen in December 2014.  I was sad to miss seeing the Dioramas again – I still remember seeing them on my previous visit over 20 years ago.  The Dioramas were created in the 1920s as models of the main battlefields of the First World War.

After discussing the fact that my mother-in-law’s relative had died as a tail gunner in Bomber Command during the Second World War, Tim took us to see an example of the tail gun turret which is on display.  I was amazed to see just how small the space was for a person to fit, and the fact that the person was essentially ‘locked in’ for the full flight.  Tim also relayed the fact that due to the small space and access issues that tail gunners could not wear a parachute, so if their plane was hit then they were unlikely to survive as they had no way to escape.

The Hall of Valour

We then moved on to visit the Hall of Valour to see the display of Australians who have been awarded the Victoria Cross, which is the highest award for bravery in time of war.  Almost 100 Australians have been awarded the Victoria Cross since it was first instituted in 1856.  Over sixty of them are on display in the Hall of Valour, along with the stories of the events that led to them being awarded to the recipients.

We also briefly visited the Vietnam War exhibition, Afghanistan exhibition and the bridge of the HMAS Brisbane before we ran out of time.

Entering Anzac Hall feels like entering another world.  The massive hall contains some of the largest exhibits, showcased within an ultra modern audio video environment.  There are three main sections on display.

On the left is the G for George display.  G for George is an Avro Lancaster bomber aircraft which survived 90 operational missions between 1942 to 1944 over Germany and occupied Europe.

Tim explained that G for George was considered to be a ‘lucky’ aircraft and the crews clamoured to be able to fly it in the hope that it meant that they were more likely to return from each mission.

The Striking by Night display which uses video, lights and sound to enable visitors to better understand what a night mission over Berlin would have been like.  I had my hands over my 5 year old’s eyes as he deemed it to be ‘too scary’, while my older children watched with fascination.  For me the display was an almost too immersive experience – seeing and hearing – from afar – what a typical mission would have been like – and then also realising that the Bomber Command crews were doing these missions almost every day and the impact that would have had on them.

On the right is the display of First World War aircraft, which includes a British Avro 504K, a British SE5a fighter, a British Airco DH9 bomber and a German D.Va scout.  You can immediately see that these aircraft were from a different era – made of wood, wires and fabric.  The Peter Jackson film re-creating a typical mission is amazing to see.

We planned the timing of our visit the Australian War Memorial so that we could be there for the daily Last Post Ceremony at 4.55pm which has been operating since 2013.  At each ceremony the story of one of the over 102,000 Australians who have died to protect our country is told.

On the day we visited the visitors to the Australian War Memorial gathered solemnly around the Pool of Reflection in preparation.  After singing the National Anthem and hearing the piper play the Lament we heard the story of Private Lyle Hicks who died on the 18th December 1942 in Papua New Guinea during the Second World War.  Family members who had gathered to participate in the ceremony laid flowers and wreaths at his memorial.

The Ode was then recited and the bugler played the Last Post before the crowd slowly dispersed.  The ceremony was deeply moving after having just seen more deeply about both Australia’s and our direct family’s experiences in war.

In Australia we commemorate Anzac Day and Remembrance Day every year so most people have learnt a little bit about Australia’s involvement in war, although it can be easy to be a bit detached about it.

By visiting the Australian War Memorial you are making the effort to learn at a much deeper level about the individual sacrifices made to protect our much coveted Australian way of life.  And hopefully once you have visited you will better understand the experiences and impacts on the individuals who go to war on our behalf.

This article was written in collaboration with Visit Canberra and the Australian War Memorial.